UPDATED 4/14 with new, shocking (did I say shocking?) information: Now that California has solved all the world’s problems and has tons of extra, spare money and new unicorns and rainbows to hand out, Jerry Brown has launched a super-duper new Very Serious Investigation into Strawgate! Updates as this story continues to unfold, er, bend.**

All I can say is too bad the Pulitzers have already been awarded. Due to some extraordinary detective work done by students and the investigative courage of the Associated Press it has been revealed that Sarah Palin demanded ‘bendable straws’ along with water for a speech at a Cal State campus. Bendable straws? Can’t the woman use regular ones? Does her neck not bend? Never would I have guessed that she was that…helpless. Clearly, all of Palin’s energy (including whatever energy a person needs to be president) must be spent hiding the frightened little 8-year-old behind the facade of a smart, savvy and confident woman who, uh, might be president some day. I know that sounds complicated, but hey, the mind is an amazing thing. You could never imagine what twists and turns it could go through to cope with the, erm, bendable straw issue. What’s next? Flavored water? Jelly beans?!

I know we have the Bruce Rule about Palin–if some claim about her seems just way too crazy, it is and you are to completely dismiss it. But this…look, this may be the exception to the rule. I have no answers, no explanation. I’ve been waiting for a shoe to drop about her. Little did I know it would be a straw.

The flare-up over Sarah Palin’s scheduled speech on a California State University campus has taken a twist after students discovered a portion of her confidential contract.

The document found in a campus Dumpster does not include her compensation for the June 25 speech to the CSU Stanislaus Foundation.

It does specify other requirements to be provided by the foundation, including round-trip, first-class airfare for two, a suite and two rooms at a deluxe hotel and transportation via SUVs or black town cars….It also requires that Palin’s lectern be stocked with water bottles and bendable straws.

The students say they acted on a tip that documents were being shredded inside the main administration building last Friday, a day that campus staff was supposed to be on furlough.

Acted on a tip? A bendable tip, I betcha! 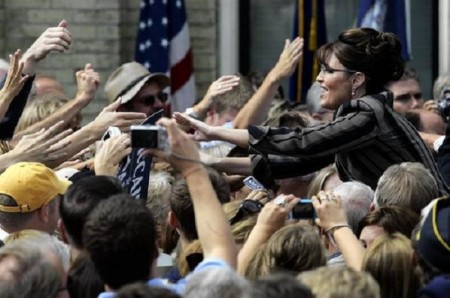 UPDATE EXCLUSIVE: Hidden camera picture of an obviously frightened and desperate Palin reaching into a crowd of complete strangers frantic for a bendy straw. Or something. What?

Suddenly previously unknown and unseen secret pictures of Palin are coming out of the woodwork. I’ve just been sent this new shocking pic of Palin frantic for yet another bendy straw, shamelessly diving into a crowd of strangers. And look, people are so sweet they’re trying to help her by handing her one! Or maybe they’re just trying to touch her, but hey, it’s the same thing. Handshake. Bendy Straw. Whatever. Sweet God, when will it end?!

This section is for comments from tammybruce.com's community of registered readers. Please don't assume that Tammy agrees with or endorses any particular comment just because she lets it stand.
30 Comments | Leave a comment
Click here to cancel reply.