Now that we’ve gotten used to being herded like cattle in airports, it’s time to play cowboy. It’s the Skyrider, a new airplane seat that gives the passenger 23-inches of space. The seat resembles a saddle. The passenger’s positioning is somewhere between sitting and standing. You think this is bad? Some airlines are considering having no seats at all. 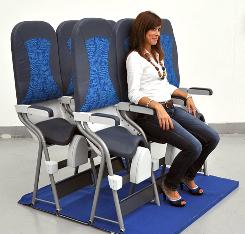 “For flights anywhere from one to possibly even up to three hours … this would be comfortable seating,” he says. “The seat … is like a saddle. Cowboys ride eight hours on their horses during the day and still feel comfortable in the saddle.”

The new airplane seat, to be unveiled next week at the Aircraft Interiors Expo Americas conference in Long Beach, would give passengers an experience akin to riding horseback.

“We feel extremely confident that this concept will … have great appeal to airlines for economic purposes,” says Dominique Menoud, director general of Aviointeriors Group.

The SkyRider could be its own class of seating, like business or coach, Menoud says. Passengers would likely pay lower fares. But airlines could boost their profits because the narrowly spaced seats would allow them to squeeze more fliers on board.

The novel design may draw interest — especially from two overseas carriers that have entertained the idea of providing no seats at all.

Whoever thinks this idea will fly is a horse’s arse.

This section is for comments from tammybruce.com's community of registered readers. Please don't assume that Tammy agrees with or endorses any particular comment just because she lets it stand.
23 Comments | Leave a comment
Click here to cancel reply.