A Pogrom in Brooklyn

NOUN:
An organized, often officially encouraged massacre or persecution of a minority group, especially one conducted against Jews.

In 1991, I was working as a staff psychologist in a Brooklyn hospital.

Some said the hospital was in Bedford-Stuyvesant. Others said it was in Prospect Heights. I always said it was just a stone’s throw from Crown Heights (well, more like a three-minute ride away.) Brooklyn is funny that way; in some places, you could be in one neighborhood, then you walk down a few blocks, and suddenly, you are in a different neighborhood.

As a staff member, I had parking privileges in the staff parking lot. At the beginning of every month, I would go across the street to the parking attendant’s booth, to present my hospital ID and my check, and I’d get a new monthly parking sticker. The parking attendant always greeted me with a warm smile and “Hey, Doc!” in his unmistakable Caribbean accent. In the background, a local religious radio station, somberly intoning passages from the Bible. We would shoot the breeze for a few minutes. I always made him laugh.

On August 19, 1991, at 8:20 pm, Yosef Lifsh, 22, was driving in a three-car motorcade of Rabbi Schneerson, the leader of the Chabad-Lubavitch sect of Orthodox Jewish Hasidim. (Although called “Hasidim,” the Jews of Crown Heights do not look like the Hasidim with the ear locks and strange garb of 18th century Poland; those Hasidim are in Williamsburg, Brooklyn, about two miles away.) Lifsh’s car fell behind. He struck another car, and crashed into a wall, pinning two seven year olds, Gavin Cato, a native of Guyana, and his cousin, Angela. Lifsh was also injured in the accident.

The rumors spread quickly. The Jewish driver was intoxicated (false; he had been given a breath alcohol test within 70 minutes of the accident.) The Jewish driver did not have a valid driver’s license. (false) The Jewish ambulance tended to the Jewish driver and ignored the two black children (false; they left only after being directed to do so by the police.)

Crowds gathered and grew larger. At around 11 p.m., someone shouted, “Let’s go to Kingston Avenue and get a Jew!” A group of young black men ran to Kingston Ave., throwing rocks and bottles. They surrounded Yankel Rosenbaum, a 29 year old Australian Jew, a University of Melbourne student (and son of Holocaust survivors) who had come to the U.S. to gather research for his Ph.D. thesis on the Holocaust. He was walking home from an evening class, and he was unaware of the nearby accident. Rosenbaum was stabbed repeatedly and beaten. His skull was fractured. He was taken to Kings County Hospital.

One block from the attack, the police saw Lemrick Nelson, 16 years old, jump over a fence and hide behind a bush. They found a bloody knife (with the word “killer” inscribed) in his pocket. His pants were stained with blood. (At his trial, three forensic experts testified that the blood on his pants and knife matched Rosenbaum’s.)

Lemrick Nelson was taken to Yankel Rosenbaum for identification. When Rosenbaum saw him, he asked, “Why did you stab me?” Nelson made two confessions to the police.

Several hours later, Yankel Rosenbaum was dead, of massive internal bleeding. Hospital records indicated that during the initial examination, ER doctors had failed to turn him over, and had not seen his back injuries.

Rioting in Crown Heights continued for three days. Jewish residents were beaten, cars were burned, Jewish stores were looted, and Jewish homes were pelted with rocks.

At this point, dear reader, you are probably asking, “Isn’t someone missing from this story?” Well, have no 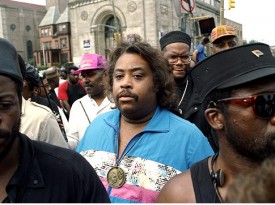 fear — “Rev.” Al Sharpton had a front-and-center role. Where else would a professional provocateur be?

“The world will tell us he was killed by accident. Yes, it was a social accident. … It’s an accident to allow an apartheid ambulance service in the middle of Crown Heights. … Talk about how Oppenheimer in South Africa sends diamonds straight to Tel Aviv and deals with the diamond merchants right here in Crown Heights. The issue is not anti-Semitism; the issue is apartheid. … All we want to say is what Jesus said: If you offend one of these little ones, you got to pay for it. No compromise, no meetings, no kaffe klatsch, no skinnin’ and grinnin’. Pay for your deeds… If the Jews want to get it on, tell them to pin their yarmulkes back and come over to my house.” A banner at the funeral read: “Hitler did not do the job.”

Sharpton, speaking on a local Caribbean radio station, urged everyone to join him in a protest march in Crown Heights. He led a crowd of four hundred, many of whom chanted, “Heil Hitler,” “No Justice, No Peace,” and “Death to the Jews.” An Israeli flag was burned.

Mayor David Dinkins and Police Commissioner Lee Brown, both African Americans, did not allow the police to stop the rioting because “the community needed to be allowed to vent.” Finally, after three days, the police were called in, and the rioting was quickly contained.

Two weeks later, on Sept. 5, Anthony Graziosi, an Italian businessman, was driving at night in Crown Heights. He had a white beard, and was dressed in a dark business suit. When he stopped at a red light, his car was surrounded by four black men. They mistook him for an Orthodox Jew. He was shot and killed.

At the beginning of September, as I did each month, I went across the street to get my new parking sticker. The attendant greeted me with the usual smile and “Hey Doc!” In the background, the radio intoned a passage from the Bible:

Village life ceased, it ceased in Israel, Until I, Deborah, arose, arose a mother in Israel.

“That’s the ‘Song of Deborah,’ from the Book of Judges,” I said.

(Deborah, a prophetess and judge in ancient Israel, circa 1000 B.C. The men brought cases before her, and they obeyed her rulings. The first Jewish feminist?)

“Ah, very good!” the attendant was impressed with my knowledge of the Bible. “You know,” I told him, “when I was a kid, I memorized the entire Song of Deborah…” He smiled.

(I knew where this was going. I was responsible for Gavin Cato’s death. I wondered if he would take responsibility for Yankel Rosenbaum’s murder. Should I tell him that I was not part of the Lubavitch community? That I didn’t even live in Brooklyn? Did any of this matter?)

We stared at each other. Finally, he looked away. I placed my check on the desk. Without looking up, he placed the new parking sticker on the desk. I picked it up, and left.

At Lemrick Nelson’s trial, his attorney called the prosecution witnesses “damn liars,” and accused the police of coercing a confession as well as planting the knife in Nelson’s pocket. He urged the jury (six black, four Hispanic and two white – none were Jewish) to use their “New York smarts” and “release this lad and send him home where he belongs.” And, he added, if anyone caused Rosenbaum’s death, it was Kings County Hospital, with their medical negligence.

Lemrick Nelson was acquitted of all charges. That evening, eleven of the twelve jurors, Nelson, and his attorney went out for a celebratory dinner.

Nelson’s family sent him to Georgia, to attend high school and to stay out of trouble. There, he bragged to friends that he “stabbed that Jew.” He was arrested for attacking a classmate with a razor blade. At the time of his arrest, he was found to be carrying a hidden scalpel. He was sentenced to 90 to 120 days in a boot camp program, three years’ probation, and expulsion from the state of Georgia.

In 1993, the Crown Heights riot was repeatedly raised during David Dinkins’ second bid as Mayor of NYC. His opponent, Rudolph Giuliani, called the riots a “pogrom,” because “for three days, people were beaten up, people were sent to the hospital because they were Jewish. There’s no question that not enough was done about it by the city of New York.” Giuliani won by over 53,000 votes.

Meanwhile, Yankel Rosenbaum’s older brother Norman, an Australian attorney, was relentless. He wanted justice for his brother. He enlisted the aid of local politicians, including then-Rep. Chuck Schumer. An investigation was launched, and in 1994, Lemrick Nelson stood trial again, this time for violating Yankel Rosenbaum’s civil rights. The defense attorney portrayed Nelson as a “sacrificial lamb.” He was found guilty, and served ten years in jail.

The following year, I decided to leave my hospital job, to focus on private practice. I went across the street to get my parking sticker for the last month of work. I placed my check on the desk, and, without looking up, the attendant placed the sticker on the desk. I did not say goodbye.

This section is for comments from tammybruce.com's community of registered readers. Please don't assume that Tammy agrees with or endorses any particular comment just because she lets it stand.
12 Comments | Leave a comment
Click here to cancel reply.