Four Servicemen Shot Down During Vietnam War Are Buried at Arlington

by Tammy on May 3, 2013
Posted in: Hero, History, Military, Patriotism
Tweet 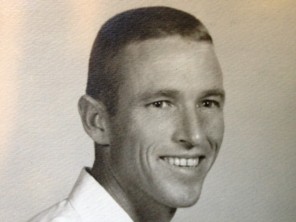 WaPo: Four shot down during Vietnam War are buried at Arlington

The remains of four Navy servicemen killed in Vietnam were laid to rest in Arlington Cemetery on Thursday with full military honors, concluding a long journey home.

Dennis W. Peterson, Donald Frye, William Jackson, and Donald McGrane died on July 19, 1967, after their helicopter came under enemy anti-aircraft fire and crashed. The men had set out from the USS Hornet to rescue a downed pilot in North Vietnam after the first rescue mission the day before had failed.

“They served with honor and valor,” the chaplain said during the service Thursday.

Their story was far from over in 1967, however.

The military recovered some remains of three crewmen 15 years after their death. In subsequent years, the military was able to identify more remains in the Vietnam countryside, including those of the final crewman, allowing for a final burial 46 years after the ill-fated mission.

“It shows the commitment of the military to leave no one behind,” Michael McGrane, the younger brother of Donald McGrane, said before the service.

“This is a way for all of the families to meet and bring it to closure,” said Karen McGrane, Donald’s youngest sister. The McGrane family had an initial memorial service after Donald’s death and then another burial service in 1982.

“It brings up a lot of memories, but it also is good to close it,” she said.