Shifra Presents ==> Our Commander in Touch

by Shifra on May 26, 2013
Posted in: Dumb Bastard, Mental Heath, Politics
Tweet

I am suffering from a severe case of ODS.

But my Derangement Syndrome extends way beyond Obama.

And the mere sight of David Axelrod makes me want to scream.

Valerie Jarrett? Don’t get me started…

But, of the many things that I cannot stand about Dear Unleader, one thing stands out.

No, I am not talking about his “whistling ‘s’”

(Although, now that I’ve brought it up, let me just say this about that:

The Obamas are worth about ten mil. So, do you think maybe they could spring for some speech therapy? If I have to hear Mooch say, once more, that we should “shtrive” to be “shtrong,” I think I am gonna go off the deep end….)

What really drives me crazy is something else. Something that Obama does. All the time.

And, no one has ever made mention of it.

At this point, perhaps I should not share this with you. I mean, maybe you will think that I am, indeed, crazy.

But, I am among friends, right? So, here goes:

In ’08, Candidate Obama went to Israel.

And then, for the first time, I saw it:

Obama put his hand on an Israeli official’s back, as if ushering him along. “Wait,” I thought at the time, “that’s so…odd. Doesn’t he have it exactly backwards? Does the guest guide the host?”

Well, in the past four years and four months of the Obama Presidency, he seems to put his hand on just about everyone.

Let me show you what I mean:

And with Irish PM Kenny:

Here he is with Israeli PM Netanyahu:

And with Israeli President Shimon Peres:

And with Palestinian President Abbas:

Here he is with Biden: 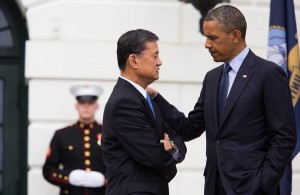 And with Chris Christie:

OMG! Mooch too?  Here she is with the Queen of England:

Whenever I see him do this, I think:

I am so on to you, Bronco Bama.

Because this is what I think: The hand maneuver could be interpreted as a sign of warmth and camaraderie.

But in  Obama’s case, I think something else is in play here.

I think it betrays an attempt, probably unconscious, to dominate, to subdue, to be the Alpha Male. Top Dog, so to speak.

So, as I said, this has been driving me crazy.

But, lately, I have been taking steps to cure myself of the ODS.

For example, instead of much gnashing of teeth when I hear him speak, I have begun to take a step back, to study the guy in a more clinical fashion.

So, when I hear him talking, I will do something like this:

Hmmm. In five minutes, he employed three straw man arguments. One moral equivalence. And 98 uses of the words “me,” “myself,” and “I.”

And, I am happy to report, I am beginning to feel better.

Just last week, the NY Post reported that when Obama was in NYC recently for three fundraisers, he said the following to his donors:

“My thinking was when we beat them in 2012, that might break the fever, and it’s not quite broken yet…. I genuinely believe there are Republicans out there who would like to work with us, but they’re fearful of their base, and they’re concerned about what Rush Limbaugh might say about them. And as a consequence, we get the kind of gridlock that makes people cynical about government.”

And, you know what? There was a time when I might have screamed, “OH, SO NOW WE ARE ASTROTURF-NAZI-BITTER-CLINGY-RACISTS WITH A FEVER???”

But now, I laughed.

And hummed a few bars of Peggy Lee’s ‘Fever.’

Anyway, things are looking up.

And,  how many more scandals?

That is anyone’s guess.

This section is for comments from tammybruce.com's community of registered readers. Please don't assume that Tammy agrees with or endorses any particular comment just because she lets it stand.
25 Comments | Leave a comment
Click here to cancel reply.