by Tammy on June 20, 2013
Posted in: Immigration, Incompetence
Tweet 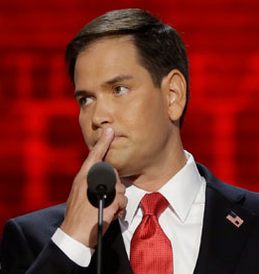 Lots going on as Republicans scurry to get shamnesty passed while “neutralizing” conservatives on the issue. Here’s the latest.

New Yorker reporter Ryan Lizza caused a bit of a stir in the conservative media world today in a report he filed for the New Yorker about the ongoing debate in the U.S. Senate over an immigration bill that is currently opposed by many conservatives. According to the piece, the so-called Gang of Eight see the role of Florida Republican Marco Rubio as being to “neutralize” conservative talk radio and to get opinion hosts on Fox News Channel to either talk up the legislation or at least not oppose it.

In their view, Rubio, who was initially touted by many conservatives nationally as their great hope even though he was regarded far more skeptically by Florida conservatives, has succeeded in his assignment.

Really? Has Rubio succeeded in neutralizing you? I warned everyone about Rubio from the beginning. He’s an opportunist who will believe in whatever it is that will advance his career. In other words, he believes in nothing.

In the meantime, the Senate has reached a “deal” abut tougher border enforcement (how many times have we heard that?). McRINO’s poodle Rubio appeared on Hannity in an effort to continue his “neutralizing” technique:

Fortunately, real conservatives have Michelle Malkin out there pushing back on this tripe. She did an excellent job, as usual.