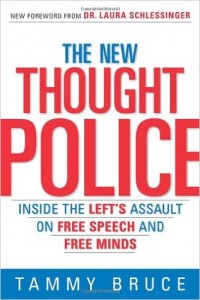 Looks like Tammy’s The New Thought Police is alive and well:

According to the new “bias-free word guide,” you can no longer say: ‘Going Dutch.’ You must now say: “splitting the bill.”

And, no more “rich” or “poor.” From now on: “person of material wealth” or “person who lacks advantages that others have.”

According to the university’s website, the guide “is meant to invite inclusive excellence in [the] campus community.”

The guide defines words such as “homosexual” as “problematic,” offering “Same Gender Loving” as a more inclusive substitute. Similarly, a lack of gender-neutral bathrooms is, according to the university, “ciscentrism.”

The university defines “ciscentrism” as “[a] pervasive and institutionalized system that places transgender people in the ‘other’ category and treats their needs and identities as less important than those of cisgender people.”

….Terms also considered problematic include: “elders,” “senior citizen,” “overweight” (which the guide says is “arbitrary”), “speech impediment,” “dumb,” “sexual preference,” “manpower,” “freshmen,” “mailman,” and “chairman,” in addition to many others….