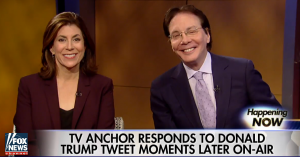 Regarding the latest feud between Morning Joe and Donald Trump, Tammy noted that the American people do not generally like the media, and Trump is going after the media; For many people, this is seen as a sign of strength. Tammy further noted that the media is not going after Bernie Sanders and the nonsense he’s spewing about the economy, and Hillary is generally ignored, because media coverage would hurt her. And, she is not interesting.

Colmes inexplicably agreed with Obama’s comments that the presidency is “serious business and not a reality show.”