by Shifra on May 2, 2016
Posted in: Legacy Media, Politics, Tammy TV clips
Tweet 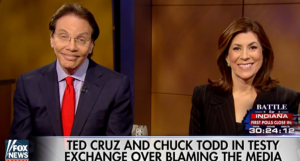 Tammy noted that Chuck Todd missed the iromy of Cruz’s accusation about the media; Todd’s badgering questions proved Cruz’s point. Tammy further noted that she would like to see the media ask Hillary about her unpopularity among millennials, how she understands Sanders’ popularity, but the media will not ask these questions of her.