WikiLeaks: How the Left Played Chief Justice Roberts on ObamaCare 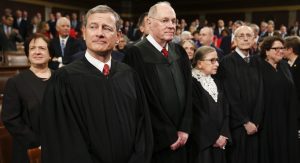 If Hillary wins, we won’t have to worry about any intimidation of the Supreme Court. She will pack the SC with people who will be very happy to do her bidding.

Ms. Tanden runs the Center for American Progress, the think tank that is essentially an arm of the Clinton campaign. CAP’s former chief, John Podesta, is now the Clinton campaign chairman, and on June 2, 2015 Ms. Tanden sent an email to Jake Sullivan, a key Clinton aide, copying Mr. Podesta and Jennifer Palmieri, another campaign operative….

Ms. Tanden wrote that, “As Jennifer will remember, it was pretty critical that the President threw the gauntlet down last time on the Court, warning them in the first case that it would politicize the role of the Court for them to rule against the ACA. As a close reader of the case, I honestly believe that was vital to scaring Roberts off.”

We wrote at the time about the campaign to mau-mau the Chief, and now we know it was orchestrated. The campaign included a Senate speech by Vermont’s Pat Leahy, a broadside from President Obamaabout “an unelected group of people” overturning “a duly constituted and passed law,” and articles by such media progressives as Jeffrey Rosen of the New Republic and Jeffrey Toobin of the New Yorker. Mr. Rosen hit the talking points out of the park when he wrote that, “If the Roberts court strikes down health care reform by a 5-4 vote, then the chief justice’s stated goal of presiding over a less divisive court will be viewed as an irredeemable failure.”

In her June 2015 email, Ms. Tanden recommended to her Clinton colleagues that they do the same thing again. “I’m not arguing that Hillary spend a lot of time attacking the Court,” she writes. “I do think it would be very helpful to all of our interest in a decision affirming the law, for [Chief Justice] Roberts and perhaps [Justice Anthony] Kennedy to see negative political consequences to ruling against the government. Therefore, I think it would be helpful to have a story of how progressives and Hillary would make the Supreme Court an election issue (which would be a ready argument for liberals) if the Court rules against the government.”

….The left knows how to pick soft political targets and it plays hardball against them. Ms. Tanden won’t comment on the email other than to say that “it’s clear that the Russians are trying to divide us against each other to help Donald Trump.” Her email shows that no matter how cynical you get about progressive methods, it isn’t cynical enough.