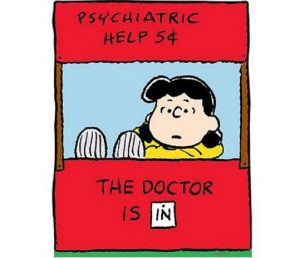 The Goldwater rule is the informal name given to the American Psychiatric Association’s (APA) code of ethics, which states it is unethical for psychiatrists to give a professional opinion about public figures they have not examined in person and obtained consent from to discuss their mental health in public statements. It is named for Barry Goldwater, who sued the APA (and won!) following his unsuccessful run for the presidency in 1964.

But, hey, who needs “ethical guidelines” when there’s an election to undermine, er, nation to save!

Three professors of psychiatry, including one from the Harvard Medical School, have written a letter to President Barack Obama expressing “grave concern regarding the mental stability of our President-elect” Donald Trump and his fitness for the office of president of the United States.

In the letter addressed to President Barack Obama and published on The Huffington Post, the professors, Judith Herman, M.D., a professor of psychiatry at the Harvard Medical School, Nannette Gartrell, M.D., formerly of the Harvard Medical School and the University of California, and Dee Mosbacher, M.D., Ph.D., also formerly of the University California, recommended that Trump undergo a “full medical and neuropsychiatric evaluation by an impartial team of investigators” prior to assumption of the full responsibilities of the office of the president of the United States.

While the professors refrained from suggesting a diagnosis due to professional standards — such as the “Goldwater Rule“– that do not allow them to diagnose a public figure they have not had the opportunity to evaluate personally, they pointed out that Trump’s “widely reported” symptoms of “mental instability, including grandiosity, impulsivity, hypersensitivity to slights or criticism, and an apparent inability to distinguish between fantasy and reality.”….

A psychology professor from the Northwestern University, Dan P. Adams, published a comprehensive psychological portrait of Trump on The Atlantic last June in which he identified narcissism as a dominant psychological trait that Trump exhibits….