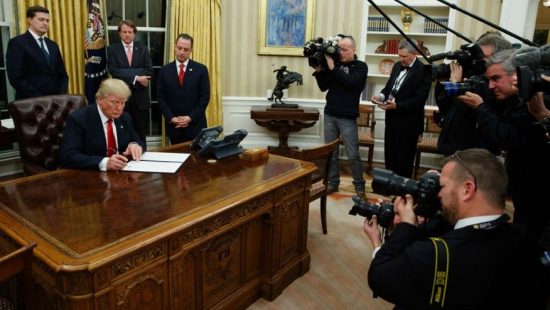 In his first hours as president Friday, Donald Trump ordered federal agencies to “ease the burden” of ObamaCare while his chief of staff directed an immediate regulatory freeze.

Trump was joined in the Oval Office by Vice President Mike Pence, Chief of Staff Reince Priebus and other top advisers as he signed the executive order on President Obama’s signature health law, which he opposed throughout his campaign.

The order directs agencies to report back on what administrative measures are needed to dovetail with legislative reforms as Republicans seek to repeal and replace former President Barack Obama’s signature legislation.

White House spokesman Sean Spicer also told reporters that Priebus would send a memo to all agencies ordering a hold on all regulations, but did not give further details.

Asked about his first day as president, Trump described it as “busy but good — a beautiful day.”