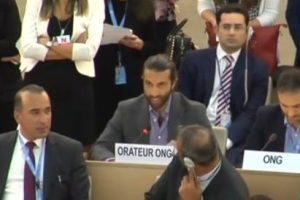 Mosab Hassan Yousef is a son of a founder of the Islamist terror movement Hamas, and a convert to Christianity.

Bravo to him for speaking the truth.

But it you still take the UN seriously, consider who is on the “Human Rights” Council: Syria, Qatar, North Korea, Pakistan, Venezuela, Iran.

The U.N. would do much more good in the world as a big parking lot in Manhattan.

A former member of the Hamas terror group stunned the United Nations Human Rights Council when he blasted the Palestinian Leadership Organization (PLO) during a speech to the body earlier this week.

Before Mosab Hassan Yousef spoke on Sept. 25, many member states of the Human Rights Council, including the PLO, Syria, Qatar, North Korea, Pakistan, Venezuela and Iran took aim at Israel, accusing the country of genocide and many other crimes against humanity….

“You kidnap Palestinian students from campus and torture them in your jails. You torture your political rivals. The suffering of the Palestinian people is the outcome of your selfish political interests,” Yousef said. “You are the greatest enemy of the Palestinian people. If Israel did not exist, you would have no one to blame. Take responsibility for the outcome of your own actions. You fan the flames of conflict to maintain your abusive power.”….

‘Son of Hamas’: When Obama Says ‘Islam Is a Religion of Peace,’ He Sets Climate For ‘More Terrorism’