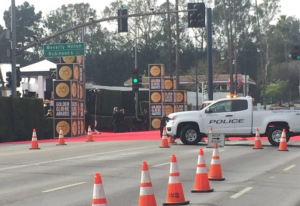 Wait, isn’t it “racist” and “anti-immigration” to demand identification checks, and twelve-foot high walls to hold back the “unwashed masses” ?

And, aren’t we supposed to ban all guns?

Even if an adoring member of the unwashed masses wanted to get close to a Hollywood A-lister, they couldn’t, as elite celebrities were protected by walls, heavily-armed police and even military vehicles near the Golden Globes venue on Sunday.

One photo shows a massive wall, approximately 12 feet high, surrounding the venue. If that wasn’t a deterrent enough, the road was blocked by heavily armed police….

Poor, oppressed celebrities had to wait a long time in their air-conditioned, gas-guzzling, carbon-spewing SUVs:

Limo line to get to the #GoldenGlobes is insane, security tighter than ever. Wouldn't be surprised if people don't make the 5pm start. pic.twitter.com/KniwCw3X9n