by Tammy on February 2, 2018
Posted in: Corruption, FBI
Tweet 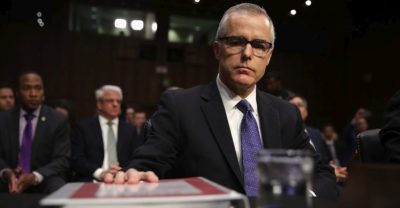 As expected. Link through to the Catherine Herridge report.

A memo that shows alleged government surveillance abuse has been released and includes testimony from a high-ranking government official who says without the infamous Trump dossier, the FBI and DOJ would not have secured surveillance warrants to spy on at least one member of the Trump team.

The House Intelligence Committee released the memo on Friday afternoon.

The memo, which has been at the center of an intense power struggle between congressional Republicans, was declassified ahead of its release Friday.

It also claims the FBI and DOJ used media reporting to lend credibility to the dossier, while the firm behind the dossier, Fusion GPS, briefed major American news outlets to include New York Times, Washington Post, CNN, New Yorker, Yahoo and Mother Jones.

The memo shows that after former British spy Christopher Steele was cut off from the FBI, he continued to pass information, as did Fusion GPS, through Justice Department Official Bruce Ohr. Ohr’s wife Nellie began working for Fusion GPS as early as May 2016.

It also claims evidence that Steele has a personal animus for the President Trump.

“Steele admitted to Ohr his feelings against then Candidate Trump, in September of 2016, when Steele told Ohr, that he Steele ‘was desperate that Donald Trump not get elected and was passionate about him not being president,” the memo reads, according to an excerpt obtained by Fox News.