UN Amb. Haley Walks Out On Palestinian When He Blames Israel for Gaza Violence 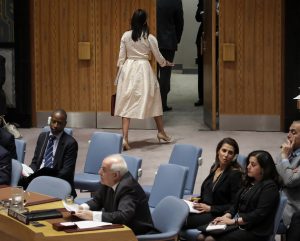 Remember when Obama’s Ambassador to the UN, Samantha Power, stood up for Israel?

Yeah, neither to I.

But I do remember her ignoring the deaths of thousands of innocent Syrians, and kicking Israel in the teeth.

Brava to Nikki Haley for standing up for the truth… and walking out when the anti-Israel haters began spewing their lies.

And shame on the MSM for their anti-Israel biased reporting, which served to score Hamas a big propaganda “win.”

Haley stood up and walked out of the UN Security Council meeting room when Palestinian Ambassador Riyad H. Mansour began his remarks. Tensions were high in the Security Council after nearly sixty Palestinian protesters were killed by Israeli forces Monday during rioting on the Gaza border.

Protesters stormed the Israeli border, armed with slingshots, rocks and Molotov cocktails. The protests were in response to the opening of the new US embassy in Jerusalem.

Haley told the emergency Security Council meeting, “No country in this chamber would act with more restraint than Israel has. In fact the records of several countries here today suggest they would be much less restrained.”….

Senior Hamas Official: This Is Not ‘Peaceful Resistance,’ It Is Supported by Our Weapons

When Someone Tells You The Palestinian Protesters Were Peaceful And Unarmed, Show Them This