by Shifra on October 23, 2018
Posted in: Death of Right and Wrong, Democrats, Holocaust, Politics
Tweet 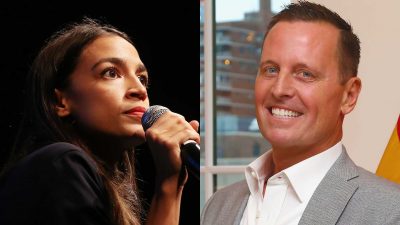 This is one of many reasons why Ric Grenell should be our next Ambassador to the UN: Just as with Nikki Haley, he speaks the truth.

Grenell has a strong record of fighting against Nazism as he played a key role in the Trump administration’s deportation of “95-year-old Jakiw Palij — the last known Nazi collaborator living in the United States — at his home in Queens, New York,” over the summer….

“It’s never acceptable to minimize the Holocaust… just note to anyone who is speaking publicly – never compare it to anything” –Amb. @RichardGrenell reacts after Alexandria Ocasio-Cortez likens the threat of climate change to Nazis pic.twitter.com/bfJ5qq2kw3

With cries of ‘racist’ and ‘Nazi,’ Democrats betray our history