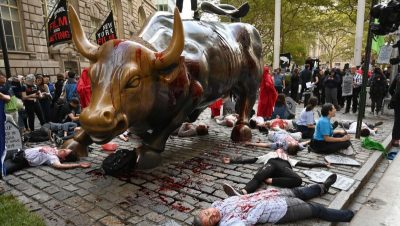 Because nothing says “critically analyzing claims made from data collected” like encouraging mass hysteria in the streets.

Wearing white laboratory coats to symbolize their research credentials, a group of about 20 of the signatories gathered on Saturday to read out the text outside London’s century-old Science Museum in the city’s upmarket Kensington district.

“We believe that the continued governmental inaction over the climate and ecological crisis now justifies peaceful and non-violent protest and direct action, even if this goes beyond the bounds of the current law,” said Emily Grossman, a science broadcaster with a PhD in molecular biology. She read the declaration on behalf of the group….

The declaration was coordinated by a group of scientists who support Extinction Rebellion, a civil disobedience campaign that formed in Britain a year ago and has since sparked offshoots in dozens of countries.

The group launched a fresh wave of international actions on Monday, aiming to get governments to address an ecological crisis caused by climate change and accelerating extinctions of plant and animal species….

“The urgency of the crisis is now so great that many scientists feel, as humans, that we now have a moral duty to take radical action,” Grossman told Reuters….

Extinction Rebellion’s flag is a stylized symbol of an hourglass in a circle, and its disruptive tactics include peacefully occupying bridges and roads….