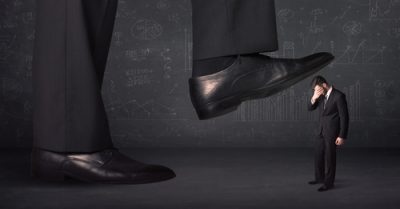 All businesses are important, but the spirit of the PPP law providing payroll loans/grants was meant to save small businesses, mom-and-pop type, and small entrepreneurs. Here, CNBC lists the *publicly held* companies who have received the PPP grants. Now that another batch seems to be ready to pass Congress it’s clear the focus must be small businesses. At least Shake Shake, which also had taken the money, gave it back after being embarrassed by the public exposure. Perhaps a campaign of public shame and exposure could convince some of these public companies to also give the money the back.

UPDATE: At today’s coronavirus briefing, Treasury Secretary Steve Mnuchin said that the PPP program was “not meant” for large public companies that have access to capital. President Trump also noted that many of these companies, the big companies that took the PPP money, will be asked to give it back.

In fact, the U.S. government has allocated at least $243.4 million of the total $349 billion to publicly traded companies, the firm said.

The PPP was designed to help the nation’s smallest, mom-and-pop shops keep employees on payroll and prevent mass layoffs across the country amid the coronavirus pandemic.

But the research shows that several of the companies that have received aid have market values well in excess of $100 million, including DMC Global ($405 million), Wave Life Sciences ($286 million) and Fiesta Restaurant Group ($189 million). Fiesta, which employs more than 10,000 people, according to its last reported annual number, received a PPP loan of $10 million, Morgan Stanley’s data showed.

At least 75 companies that have received the aid were publicly traded and received a combined $300 million in low-interest, taxpayer-backed loans, according to a separate report published by The Associated Press. 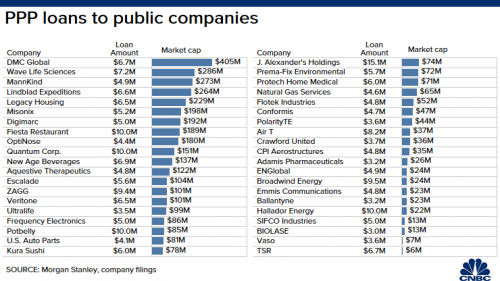