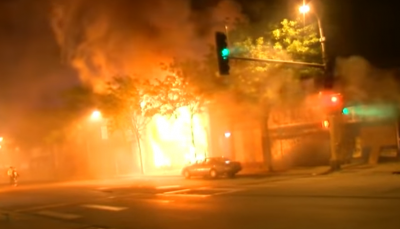 You might think that maybe Hillary would be wise enough to sit this one out, but then you would be wrong. Because Embittered Hillary just can’t help herself.

But where is @jack when you need him? Hillary’s tweet needs a big fat fact-checked label.

….Because she, too, often sees opportunity in tragedy to score cheap political points at the expense of actual leaders, failed 2016 Democratic presidential nominee Hillary Clinton weighed in this morning with an attempted dunk on Trump over tweets he posted last night about sending in the National Guard to take control of the situation, tweets that got him in trouble with the Twitter Thought Police. Here’s what she said:

The president of the United States is calling for violence against American citizens.

That is so wrong. We need honest reckoning and reconciliation.

If you haven’t already joined the work to replace him in November, start now.

A week ago you called peaceful protesters in Michigan "domestic terrorists"

President @realDonaldTrump has ordered the National Guard to stop the extreme violence, arson, and looting in #Minneapolis. You on the other hand were solely responsible for allowing 4 American citizens to die in #Benghazi. Then you lied about it.

Sooo… Trump is wrong, but the people who are burning their city to the ground, looting, and destroying all property in their way are fine in your book?