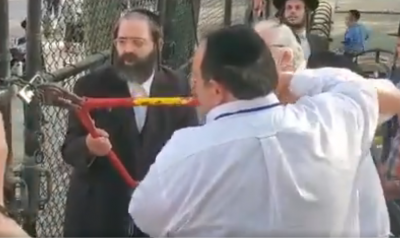 “Silver lining” to the NYC COVID-19 quarantine fiasco: Entire communities are finally fed-up with Democrat rule, and will be voting GOP.

….Residents, community leaders and elected officials have held protests at playgrounds since Thursday, amid mounting frustration over what many Brooklyn residents see as a double standard – Mayor Bill de Blasio’s allowing protest gatherings to continue just blocks from where children and mothers have been expelled from playgrounds.

“Our kids have been locked up at home for three months,” said Assemblyman Joe Lentol, at a standing Monday afternoon at Middleton Playground, between UJO head Rabbi Moshe Dovid Niederman and community activist Moishe Indig. “And now that summer is here, they can’t even go to a place to play. What kind of a message does chaining up their playground send to the world?”

Then, channeling another elected leader standing at a political barrier decades ago, Lentol declared, “Mr. Mayor, open up this park! Open up this playground!”

“The message should go out,” said Lentol, “that there are playgrounds that have already been opened. I don’t know why this particular playground has been targeted; it shouldn’t be. There are people who get a free pass – they protest in the street, nobody bothers them … What about our children? Our children deserve a playground.

The gates of Middleton playground had been welded shut earlier Monday – apparently because several Brooklyn playgrounds have had their chains broken by residents eager to get inside – raising an outcry from community members and leaders….

The welding was later removed and replaced with the standard chains prior to the protest.

During the protest, some participants broke the chains on the both sides of the park, which runs on Lynch and Middleton Streets, between Lee and Bedford Avenues, and everyone, from Lentol and the community activists to the parents and children, took a walk in their reacquired open spaces. Police nearby made no attempt to prevent entry to the park.

Residents said they hope the city will make no further efforts to shutter the playgrounds.

“Our children’s health is always our priority!” Tziri Hershkovits, a mother of four, told Hamodia. “That is why we were make the effort to give our kids fresh air and exercise. If the government cared at all about their physical and emotional well-being, they would encourage park going – not stop it.”….