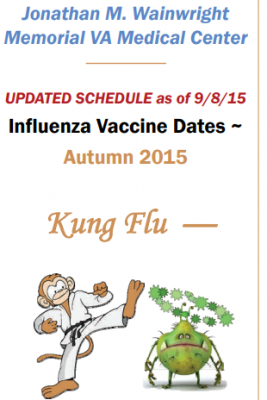 The CBS reporter is now planning to ask Obama why he allowed his administration to use such a ‘racist’ term. The interview will take place on the 12th of Never.

EXCLUSIVE: Two federally-run Veterans Affairs (VA) hospitals during the Obama administration used the term “Kung Flu” in official materials, along with imagery of a monkey in a karate suit and a ninja wearing a flu mask, Fox News has learned.

President Trump’s use of the term “Kung Flu” to refer to the coronavirus has drawn accusations of racism and insensitivity, but the use of the term under the Obama administration has gone unreported….

CBS’ Weijia Jiang, a Trump critic, first brought up the topic, asking why the president uses “racist” terms such as “Kung Flu.” Jiang previously claimed that a White House offiical had used the term “Kung Flu,” but she has refused to name the official without explaining why….

.@PressSec is asked by @weijia why he uses "racist phrases" like "kung flu" to describe the virus:

"While the media wants to focus on nomenclature, the president is going to focus on action" pic.twitter.com/1D0eOo2jv9