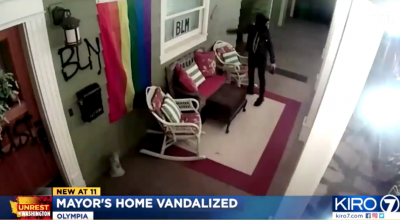 Why was the mayor of Olympia, Washington so upset that her house was broken into and vandalized? Why did she say it was all “so unfair” ?

She should learn from ‘noted theologian’ and designer of the ‘90’s Grunge Look Marc Jacobs, who has a net worth of $100M, and said this after his upscale LA store was trashed:

“NEVER let them convince you that broken glass or property is violence….Property can be replaced, human lives cannot.”

So, calm down, Mayor Selby, your vandalized home is “all for the cause.” Or something….

It’s all fun and protests until someone vandalized your home.

Olympia, Washington, Mayor Cheryl Selby has been a vocal supporter of Black Lives Matter and those protesting and rioting across the nation, yet when her own home was vandalized during the demonstrations, she called it “domestic terrorism.”

The Olympian reported late last week that “two groups converged in downtown Olympia, and some became destructive, burning flags, smashing windows, and spray painting businesses” before moving into Selby’s neighborhood and vandalizing her home….Neither Selby nor her family were home when the incident occurred, but she received texts from her neighbors about the vandalism.

“I’m really trying to process this,” she told the Olympian. “It’s like domestic terrorism. It’s unfair.”
“It hurts when you’re giving so much to your community,” she added….

Selby sent KIRO 7 footage from her front porch surveillance camera and told them “It’s pretty traumatic when somebody comes to your home.”….