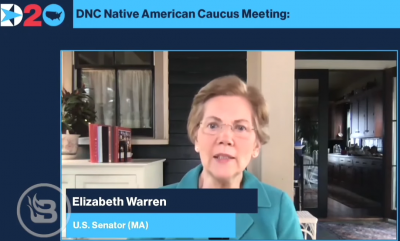 Is anyone actually in charge of this DNC disaster, er, convention? Or are some recently hired high school interns running the show?

So many trolls flooded a Democratic Convention Native American Caucus meeting where Elizabeth Warren was slated to speak that organizers disabled a chatroom accompanying the livestreamed event.

The Trump campaign and other conservatives on social media pointed out that the Massachusetts senator would be speaking at the event on Tuesday while alluding to Warren’s previous claims to Native American ancestry.

Posters sent messages referencing Pocahontas, a slur that President Trump uses when talking about Warren; “1/1024,” a reference to the small amount of Native American ancestry Warren could have based on a 2018 DNA test that showed she has a Native American ancestor six to 10 generations ago….