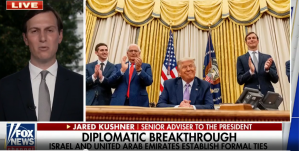 I thought “accidental” meant slipping on a banana peel. But looks like poor Joe is just eating sour grapes.

But here’s a question for Joe and his BFF Barack: Was the $150B in pallets of cash “accidentally” shipped from the Obama Administration to Iran?

Former Vice President Joe Biden acknowledged Thursday that President Donald Trump is making peace between Israel and several Arab states, but he said that he was doing so “accidentally.”….

As Breitbart News noted Friday, Biden’s main argument was reportedly that Trump had “put Israel in danger,” despite the peace agreements, because he had withdrawn from the Iran nuclear deal, and the Iranian regime was enriching uranium.

However, an intelligence trove seized by Israel and revealed by Israeli Prime Minister Benjamin Netanyahu in 2018 showed that Iran had never intended to suspend its nuclear program. The deal allowed it to resume its work after roughly a decade.

Democrats struggled Friday to downplay the news that the Trump administration had brokered yet another peace agreement between Israel and an Arab nation — in this case, Bahrain….