by Shifra on September 15, 2020
Posted in: Absurdity, Imagine That, Politics, Trump Revolution
Tweet 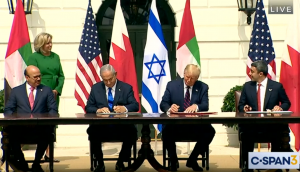 Looks like CNN is suffering from a case of ‘Peace Envy’… Paging Dr. Sigmund Freud 🙂

CNN appeared to bury the lede by sounding the alarm oh the “large crowd” and “little social distancing” at the White House event commemorating the historic peace deal between Israel, United Arab Emirates (UAE), and Bahrain.

However, CNN’s coverage of the event was less focused on the groundbreaking peace agreement and instead shamed the White House for holding such an event amid a pandemic….