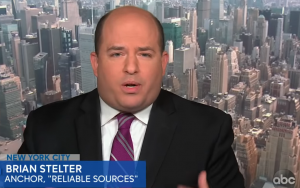 Looks like Brian Stelter, aka ‘Potato Head’ and ‘Tater,’ watches Tucker Carlson. But he seems to live in a bubble, as he appears unaware that the left is becoming even more unhinged since the death of RBG.

He must have missed this article on the Fox News site:

Just another normal night over on "Tucker Carlson Tonight…"

The banner says "THE LEFT THREATENS VIOLENCE OVER COURT NOMINATION."

Listen Mr. Piggy, if you want Tucker’s ratings you have to go with Tucker’s tactics. Call out the left, AND the right when their actions contradict their words and stated principles. It’s what “journalists” are supposed to do. Not everyone will like it, but people will watch.

Yep…a normal night with millions of viewers, while your little show gets lower ratings than a late night ShamWow infomercial…

Stelter doesn’t have viewers, he has airport TVs