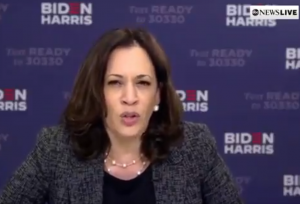 Ok, Kamala, we all suspected you were already picking out the drapes for the Oval Office. And scouting the best basement in DC for ol’ Joe.

So thanks for the confirmation.

And you might want to look up this WWII saying: Loose Lips Sink Ships

She’s reading her comments. There’s an argument this wasn’t a faux pas, but a rather transparent effort to confirm to voters that their obviously incapable nominee is a Trojan Horse. Their delusion is that voters would be OK w an admission that Dems are resorting to fraud. https://t.co/uYo7GM8pEw

It's going to cost a lot to redo all the signs. https://t.co/Vs52mXx6FM

Speaking during a virtual roundtable with small business owners in Arizona, Harris vowed that they will have an ally in the White House with the campaign’s “Build Back Better” initiative.

However, the California senator appeared to briefly suggest that she was at the top of the Democratic ticket….

"A Harris administration together with Joe Biden…"