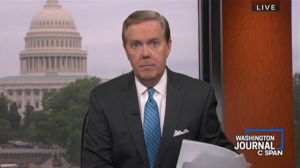 Yeah, no bias there 🙁

The second presidential debate, scheduled for October 15, will be moderated by Steve Scully, the political editor at C-SPAN and host of Washington Journal, who once worked as an intern for Senator Joe Biden in college, later working as a staff assistant in Sen. Edward M. Kennedy’s communication office.

In an interview with Journalism Jobs in May 2011, when he was asked, “Has the quality of broadcast journalism decreased over the past five years?”, Scully took the opportunity to rip Fox News, stating, “I think what has gone downhill is when cable networks get caught in all the titillating news of the day when they should be focusing more on the things that are important to people, like following the money and the state of the nation….

And here he is, arguing with a C-Span caller, insisting that the Chinese, er, COVID-19 Virus was *definitely not* man-made: