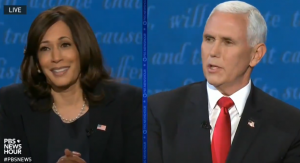 So many distortions and lies flying out of Kamala Harris, it was hard to keep score. And which one of her debate prep helpers dug up this little nugget about Abraham Lincoln holding off on filling a SC seat until after the election ? Did they really think this would be a winning lie, er, line?

But after her performance last night, I think we can all agree that she is definitely ready to be president…of her local book club.

Kamala Harris must have been so proud of herself. During the vice-presidential debate on Wednesday, she argued that President Donald Trump should not have nominated Amy Coney Barrett to replace the late Supreme Court Justice Ruth Bader Ginsburg, and she cited as her precedent none other than Abraham Lincoln himself — “Honest Abe.”

As it turns out, however, Kamala Harris was being less than honest in her portrayal of Abraham Lincoln’s record.

“But Honest Abe said, ‘It’s not the right thing to do. The American people deserve to make the decision about who will be the next president of the United States and then that person can select who will serve for a lifetime on the highest court of our land.'”

Yet Lincoln said no such thing….

How Kamala Harris lost the debate with her body language