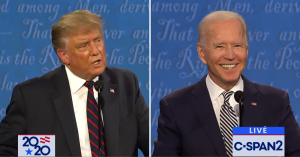 ….“You talk about the economy booming,” moderator Chris Wallace told Trump at this week’s presidential debate. But “in Obama’s final three years as president, more jobs were created, a million and a half more jobs, than in the first three years of your presidency.” Wallace was echoing one of the Biden campaign’s favorite talking points.

But here’s the thing: That talking point depends on misleading and cherry-picked data.

Most significantly, it ignores the worker shortage during Trump’s second and third years in office. Obviously, it’s harder to add jobs when employers can’t find workers. But rather than an economic shortcoming, this shortage was a result of the Trump economy “booming,” producing job openings so abundant that they exceeded the number of people looking for work — by a lot….

This worker shortage was the defining difference between the Obama-Biden era and Trump’s first three years in office….

In fact, when Obama and Biden left office in January 2017, there were 1.9 million more people unemployed than there were job openings. So there was an abundance of people looking for work, but too few jobs opportunities open to them….

Thus, when Trump talks about “a booming economy,” he is absolutely correct. Wallace’s question ignored the overwhelmingly positive impact of Trump’s policies on businesses and workers alike….