Video: Kamala Harris Gets Giddy When Asked About Her ‘Socialist Perspective’ 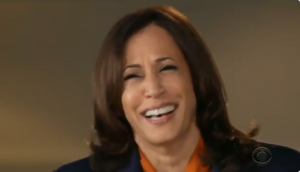 This appears to be Kamala’s default response to all questions: bursts of laughter. We know that she is probably planning to measure the drapes in the Oval Office on Nov. 4.

But, as they say in Brooklyn, fuhgeddaboudit, Kamala.

….For her part, vice presidential nominee Kamala Harris is, when on the trail, giddy. She’s dancing with drum lines and beginning rallies with “Wassup, Florida!” She’s throwing her head back and laughing a loud laugh, especially when nobody said anything funny. She’s the younger candidate going for the younger vote, and she’s going for a Happy Warrior vibe, but she’s coming across as insubstantial, frivolous. When she started to dance in the rain onstage, in Jacksonville, Fla., to Mary J. Blige’s “Work That,” it was embarrassing.

Apparently you’re not allowed to say these things because she’s a woman, and she’s doubling down on giddy because you’re not allowed to say them. I, however, take Ms. Blige’s advice to heart: I will not sweat it, I will be myself. Kamala Harris is running for vice president of the United States in an era of heightened and unending crisis. The world, which doubts our strength, our character and our class, is watching. If you can’t imitate gravity, could you at least try for seriousness?….

Incredibly telling interview. This is so uncomfortable to watch.