AOC Says She Might Quit Politics, As Dems Blame Progressives for House Losses 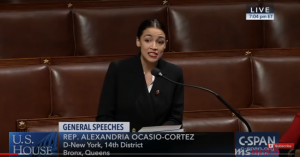 Rep. Alexandria Ocasio-Cortez reportedly told the New York Times in an interview that she might quit politics, depending on the hostility of her own party towards progressive causes.

The Bronx native said the Democratic party has been hostile to progressive causes, like Medicare for All and the Movement for Black Lives….

The interview happened Saturday, shortly after major news networks called the election for President-elect Joe Biden. While Biden won the presidency, Democrats down-ticket didn’t fare quite as well, with some centrist party leaders blaming progressive messaging for the loss of House seats….