by Shifra on November 7, 2020
Posted in: Coronavirus, Hypocrisy, Politics
Tweet 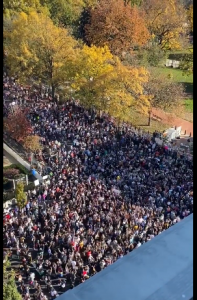 Well, looks like COVID is over… now that Joe is… wait for it… announcing a COVID task force on Monday.

And suddenly, it’s ok to jump into a crowd without a mask. Just ask Chuckles, er, Charles Schumer:

Over the past eight months, CNN has become the go-to network for alarmist coverage of the coronavirus outbreak, but the anti-Trump channel sang a different tune on Saturday as thousands gathered in cities across the country to celebrate Joe Biden’s election victory….
…
In the weeks leading up to the election, CNN repeatedly condemned the Trump White House for holding various events in apparent defiance of the Centers for Disease Control and Prevention’s (CDC) pandemic guidance. Those events, including ceremonies to mark the nomination and confirmation of Supreme Court Justice Amy Coney Barrett, were billed by the network as “potential superspreader” events.

However, the network’s concerns about the possible spread of the virus were virtuall non-existent Saturday.

“People have just gone out to the streets. People are just so excited, so happy right now,” CNN anchor Wolf Blitzer said in response to images of gatherings in cities like Washington D.C., Philadelphia, and New York City. “They’re wearing masks. They’re not [doing] much social distancing, but they are at least wearing masks.”….

Where is @JoeBiden calling on the massive Super Spreader events held in his name to end❓ ⬇️ pic.twitter.com/8JaofpgMge