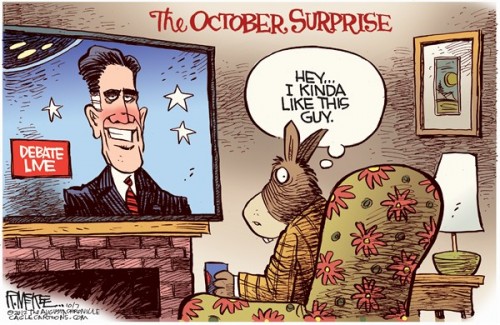 This was a good night for Romney. Sure, he missed some opportunities, but his message was clear and strong, and even more importantly, Americans saw the same man tonight they saw in the first debate. You can’t say that for Obama. I thought the New Tough Faux Obama wouldn’t work out for him. Obama already has an issue with falsehoods, now we can add him personally to the equation. Bottom line–Obama needed to somehow either paint Romney as unqualified (that opportunity passed with the first debate) or present himself as some new person, ready to do something completely different for the next 4 years. He failed on both accounts.

We knew that as long as Obama didn’t fall off the stage he would be declared the winner by the media. But this was Romney’s night. Take it from the Luntz panel of Undecideds in Nevada. This says it all. Click the link for the video.

This section is for comments from tammybruce.com's community of registered readers. Please don't assume that Tammy agrees with or endorses any particular comment just because she lets it stand.
42 Comments | Leave a comment
Click here to cancel reply.