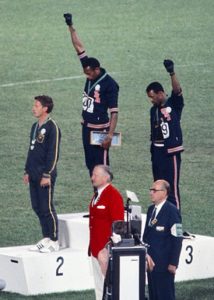 1968 was a time of racial unrest (much like today, thank you Obama Regime) and their “Black Power” salute violated Olympic rules.

And shocked the country.

But, after inviting the BLM thugs to the White House, of course Obama would love to meet these two men.

How long before Obama gives the Medal of Honor to Colin Kaepernick for his stunt?

Here is Reuter’s glowing piece about the upcoming event:

Tommie Smith and John Carlos, the two African-American athletes sent home from the 1968 Olympic Games for their raised-fist protest on the medal podium, will receive a long-awaited moment of redemption at a U.S. team event at the White House this week.

The two were invited by the U.S. Olympic Committee to attend a gala dinner on Wednesday in Washington honoring the 2016 Olympic team and accompany the team to meet President Barack Obama at the White House the following day, Carlos told Reuters on Sunday.

The image of Smith and Carlos, gold and bronze medalists in the 200-meter track event in Mexico City, thrusting their black-gloved fists into the air, has become an enduring symbol of the fight for racial equality.

Their example has surfaced repeatedly in past weeks as an inspiration to African-American National Football League and college players protesting racial injustice after the fatal shootings of several black men by police.

Smith and Carlos paid a high price for their protest, not only with the Olympic Committee but also in the court of public opinion.

“It was against the charter of the Olympic Committee to make a political statement at the victory podium,” Carlos said in a phone interview. “But we felt it was the only place we could make the statement at that time.”….