Kudos to a Brave Saudi Housewife

It’s a jarring dichotomy that poetry is highly regarded in a culture that dehumanizes women. In the Arab world, well known poets are treated like rock stars. One brave woman is rocking the boat with her poems.

“The Milliion’s Poet” is a talent contest show like “American Idol” or the British T.V. “X Factor”, but for poets. The run-of-the-mill poetry heard on the show is about Bedouin Life, praising the glories of rulers or ruing the disparity between rich and poor. Hissa Hilal, a Saudi housewife, did something different.

In a live broadcast across the entire Arab world, wearing her burkha, alone on stage, Hissa Hilal attacked hardline clerics as

‘vicious in voice, barbaric, angry and blind, wearing death as a robe cinched with a belt,’

The studio audience loved it. Viewers cast their votes for her. Militants issued death threats. 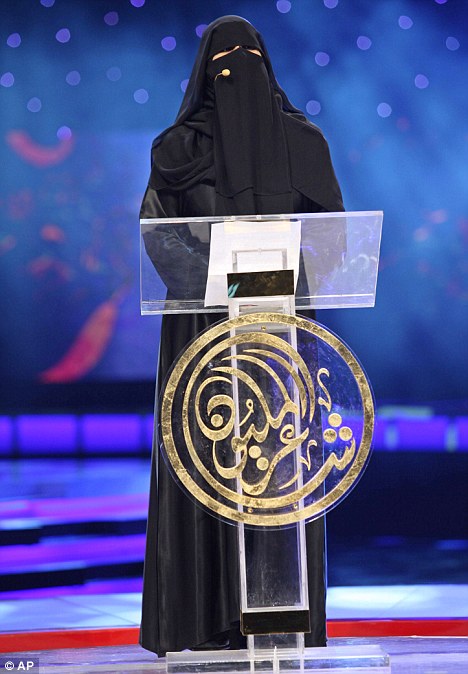 ‘My poetry has always been provocative,’ she said. ‘It’s a way to express myself and give voice to Arab women, silenced by those who have hijacked our culture and our religion.’

Her poem was seen as a response to Sheik Abdul-Rahman al-Barrak, a prominent cleric in Saudi Arabia who recently issued a fatwa saying those who call for the mingling of men and women should be considered infidels, punishable by death. But, more broadly, it was seen as addressing any of many hard-line clerics in Saudi Arabia and elsewhere in the region who hold a wide influence through TV programmes, university positions or websites.

‘Killing a human being is so easy for them, it is always an option,’ she told AP.

She described hard-line clerics as ‘vicious in voice, barbaric, angry and blind, wearing death as a robe cinched with a belt,’ in an apparent reference to suicide bombers’ explosives belts.

The three judges gave her the highest marks for her performance, praising her for addressing a controversial topic. That, plus voting from the 2,000 people in the audience and text messages from viewers, put her through to the final round.

Hilal said she had heard about the death threats posted on Islamic extremist websites and was concerned, but ‘not enough to send me into hiding’.

Some might fault her for wearing the burkha. I think it underscores her message. I hope we can keep track of her.