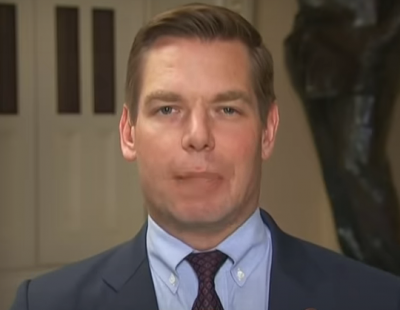 Looks like Eric Swalwell didn’t get the memo from Pelosi yesterday: In her little dramatic photo op, she held a Bible and lectured us that this is a time for healing.

And no, Eric, there was no “gassing” of protestors before President Trump walked to the church across from the WH.

Another unfortunate and disgusting Nazi reference.

Someone needs to send him a copy of “Things That Offend The Jewish Community…For Dummies.”

After Grenell tweeted about the National Park Service’s denial of using tear gas against protesters in front of the White House, Swalwell wrote on Twitter that Grenell “is Goebbels with a Twitter account.”…

RJC called on Swalwell to make a “genuine apology” to Grenell, to Swalwell’s constituents, and to the victims of the Nazi regime “whose suffering he minimized by this comparison.”

Swalwell took to Twitter Wednesday to tell RJC he is not sorry, claiming that one day his children would ask him, “Dad, what did you do when Trump gassed peaceful protestors for a photo-op at a church?”….