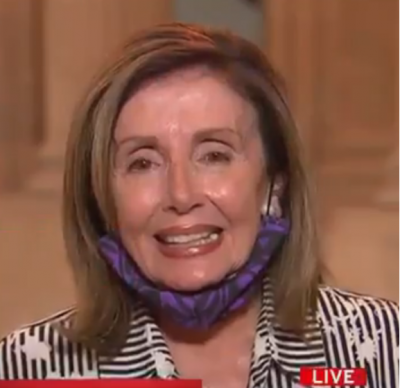 Nancy Pelosi (D-Planet Zog) now says she did not call the Federal Police “Storm Troopers,” but that they acted like Storm Troopers.

Oh, ok, got it. That clears everything up.

Now waiting for Pelosi to deny she called the AG a blob. Will she say Bill Barr just acted like a blob?

House Speaker Nancy Pelosi attempted to clarify her description of federal police in Portland as “storm troopers” following criticism from Attorney General William Barr by claiming she only said they “acted” like storm troopers….

Pelosi’s comment is at odds with a tweet she posted on July 17. She wrote: “Unidentified stormtroopers. Unmarked cars. Kidnapping protesters and causing severe injuries in response to graffiti. These are not the actions of a democratic republic. @DHSgov’s actions in Portland undermine its mission. Trump & his stormtroopers must be stopped.”….

During the MSNBC appearance, Pelosi called the treatment of protesters in Washington’s Lafayette Square in June a “disgrace” before referring to Barr as a “blob.”….