Report: Three Federal Officers in Portland May Have Been Permanently Blinded by Lasers 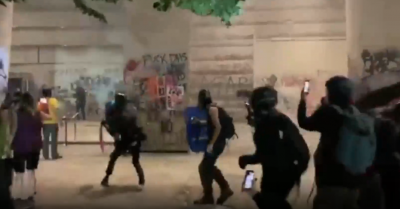 Well, as Nancy Pelosi has infamously said, “People will do what they do.” And looks like she includes purposely and permanently blinding law enforcement officers.

After an effort by the legacy media to disappear the story, the nation is finally hearing about the mayhem and violence overtaking Portland, Oregon. For almost two months, the city has been in the grip of typical vandalism, chaos and bedlam that is the hallmark of the fascists group Antifa, a federal declared terrorist group. They, along with the Democratic-aligned Marxist group Black Lives Matter, have made Portland a hellscape for the law-abiding citizens who live there….

Democrat leadership calls federal law enforcement “stormtroopers” as local leadership fights against assistance to stop murderous crimes waves killing their cities. The rhetoric against police continues, and police budgets are getting cut, as in New York, where certain crime units have already been disbanded. Democrats revel in anarchy and mayhem, and throwing your family into the volcano is the price they decided is worth paying as they imagine making Trump look bad.

At least three federal officers in Portland may not recover their vision after earlier this week demonstrators, who have shown up in crowds of over 1,000 for more than 50 consecutive nights, shined lasers in their eyes and threw fireworks at a federal courthouse, officials said….

Federal Protective Service (FPS) Deputy Director of Operations Richard “Kriss” Cline said at a press conference on Tuesday that a crowd of more than 1,000 “rioters” surrounded the Hatfield Federal Courthouse and began removing plywood coverings before attempting to throw objects – some of them incendiary – through the windows at federal officers inside.

“When officers responded to put out these fires, glass bottles were thrown and lasers – which can cause permanent blindness – were shined in their eyes,” Cline said. “We have three officers who currently have eye injuries and they may not recover sight in those eyes from those laser attacks.”

The FPS has purchased anti-laser glasses that federal officers are now wearing to prevent eye injuries….