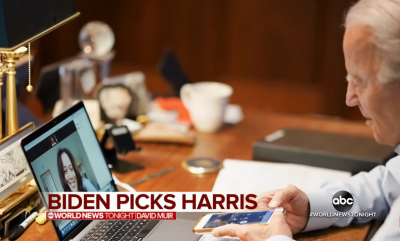 Looks like ABC did not get the memo to crop the script from the Biden-Harris pic.

Shortly after Joe Biden called Sen. Kamala Harris about tapping her as his running mate, the gaffe-prone former veep was mocked for using a script during his virtual chat, according to reports.

A photo posted on his account shows the 77-year-old speaking on a laptop with the beaming California senator as he holds up his iPhone with its speaker facing the computer, suggesting someone else was on their call, the Daily Mail reported.

But it was a sheet of paper seen under the phone that caught people’s attention….

Biden's staff had to write a script for him so he'd know why he was even talking to Kamala Harris. "I'm calling you today because…" pic.twitter.com/9iUMnVzmtZ

It’s an embarrassment Biden needed talking points to talk to his own VP.

Biden is clearly a puppet of the left. pic.twitter.com/kaiTOz0tDT

Joe Biden needed talking points for when he asked Phony Kamala Harris to be his running mate.

CNN and other media outlets are trying to cover up this embarrassment. pic.twitter.com/v2PF17DANk