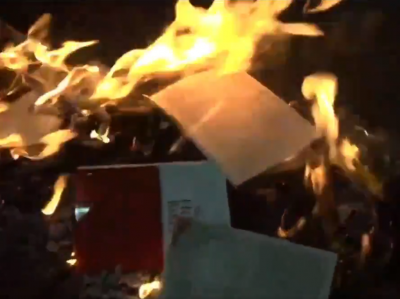 Left-wing activists bring a stack of Bibles to burn in front of the federal courthouse in Portland. pic.twitter.com/lYWY0x8n8P

On the 63rd night of riots in Portland, antifa rioters set a bonfire in front of the federal courthouse. Since they care so much about the death of George Floyd, they decided to burn Bibles. Seriously, they threw copies of the Bible on the fire….

Portland activist Lilith Sinclair explained the mentality behind her “protest:” “There’s still a lot of work to undo the harm of colonized thought that has been pushed onto Black and indigenous communities.” As examples of “colonized thought,” she mentioned Christianity and the “gender binary.” She said she organizes for “the abolition of … the “United States as we know it.”….

In a November 9, 1995 op-ed, the 1619 Project founder condemned Christopher Columbus as “no different” from Adolf Hitler and demonized the “white race” as the true “savages” and “bloodsuckers.” She went on to describe “white America’s dream” as “colored America’s nightmare.” Rep. Ilhan Omar (D-Minn.) expressed a similar sentiment when she called for the “dismantling” of America’s “economy and political system,” in order to root out supposed racist oppression.

Yet the “1619 riots” have arguably oppressed black people far more than the U.S. supposedly does. The riots have destroyed black lives, black livelihoods, and black monuments. At least 22 Americans have died in the riots, most of them black.

Burning the Bible fits this destructive narrative, and it also provides yet another powerful contrast with the civil rights movement of the 1960s. Rather than burning Bibles, Martin Luther King Jr. quoted them, in order to galvanize peaceful protesters and shame the segregationists who opposed them. Rather than attempting to burn down federal courthouses, King appealed the consciences of Americans — using the very Bible that Portland rioters burned….