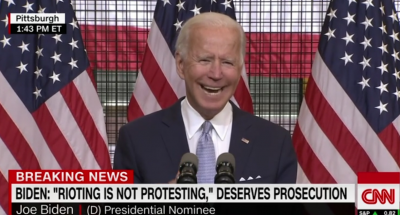 Biden’s Pittsburgh speech yesterday was, as expected, hailed by the Dems and MSM (but I repeat myself) as a big success. The NYT called it a “blistering speech” and a “forceful rebuttal to Trump.”

It was a shocking pack of lies, as Tucker Carlson stated. (see below) But I do admit to enjoying the ‘highlights’:

They can't sort out technical difficulties at his campaign stop in Pittsburgh, PA. pic.twitter.com/u3grhOwVPW

Trump is responsible for the ‘birth of the right American future’ ?

“COVID has taken this year, more than 100 years, think about this:”

A Biden speech on violence in which he never once names BLM or Antifa. He instead calls out "right-wing militias, white supremacists, vigilantes—who infiltrate protests carrying weapons of war.”https://t.co/ID9na2jPpX via @WSJ