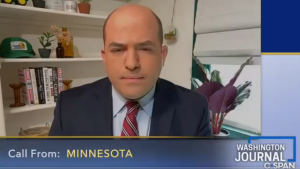 After being attacked for running a network that is the ‘enemy of the truth,’ CNN’s Brian Stelter said he was ‘grateful’ for the call…yet another lie, er, untruth.

A CSPAN caller tells @brianstelter that CNN is the “enemy of the truth” and “dividing our nation,” citing instances such as the settlement CNN had to pay to Nick Sandmann.pic.twitter.com/zicQYStMxm

….Stelter said that he was “grateful” for the caller’s criticism before pivoting and saying that “there’s been a process of radicalization of media bashing that is absolutely unprecedented,” although he did not provide evidence of his claim….

C-SPAN caller to Brian Stelter: “They put on FIERY BUT MOSTLY PEACEFUL PROTEST. Laugh there, Humpty Dumpty. We all know you’re not reliable.”

Stelter: “I think the idea is that Humpty Dumpty had a great fall so I guess he’s waiting for me to have a great fall?” pic.twitter.com/sQEJChz5Lp