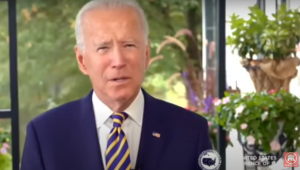 But it’s understandable that ol’ Joe got the facts mixed up…after all, he was first elected to the Senate 180 years ago!

Joe Biden says he got to the Senate 180 years agohttps://t.co/qlD6ZMR1fG pic.twitter.com/zxZKvXA6jj

Democratic presidential nominee Joe Biden alleged on the campaign trail last year that he had jumpstarted his academic career at Delaware State University.

However, according to a new report in The Washington Times, the historically Black college refutes Biden’s claims.

The director of news service for Delaware State, Carlos Holmes, said that the former vice president was never a student, though he has made appearances on campus twice before for commencement speeches at the university in Dover….

Biden had made the claim during an October 2019 town hall event held at the historic Wilson High School in Florence, which was founded in 1866 by the Freedmen’s Bureau for Black children seeking an education.

“I got started out of an HBCU, Delaware State — now, I don’t want to hear anything negative about Delaware State,” Biden told the crowd, as shown on video. “They’re my folks.”….