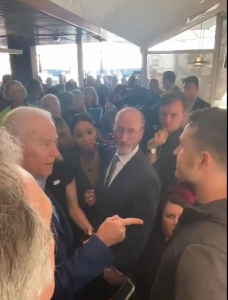 Instead of the Trump-hates-the military hoax, er, unsubstantiated rumors floated by Trump-haters, let’s go to an actual video of Biden acting like a jerk, er, disrespecting an Air Force vet by shoving a finger in his face and then walking away.

….Recorded at a campaign event in Oakland, California, one video from this past March showed a veteran later identified as U.S. Air Force veteran Michael Thurman trying to ask Biden a question about his prior support for the deadly Iraq War.

“I’m an Air Force veteran. I’m here with an Army veteran. We are just wondering why we should vote for someone who voted for a war and enabled a war that killed thousands of our brothers and sisters, countless Iraqi civilians?” Thurman said….

Instead of empathizing with the man, Biden chose to make it all about himself.

“So was my son, was in Iraq, okay? For a year. Not that it matters, right? You don’t think it matters to me? It matters a lot to me. Let me tell you something,” he said….

Wow, an Air Force vet calls Biden out for voting for the Iraq War

"We are wondering why we should vote for someone who voted for a war & enabled a war that killed thousands of our brothers & sisters?…Their blood is on your hands…My friends are dead because of your policies!" pic.twitter.com/3S3E1PrVuu