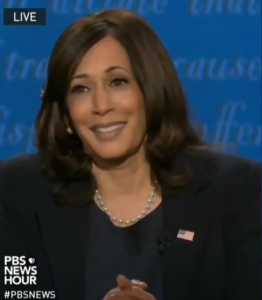 I was planning to write a post about Kamala Harris yukking it up with Rachel Maddow over the fly on VP Pence’s head during the debate. Because, was it really so hilarious? And could Kamala perhaps have used the interview to explain to viewers what to expect from a Harris-Biden Administration?

Rachel Maddow: We could see [the fly on Mike Pence's head] at home. Could you see it next to him?
Sen. Kamala Harris: … pic.twitter.com/Iu0LwOGPfL

But then I saw an article from The New Yorker, admonishing us on the racial politics of Kamala Harris’s performance style.

Via The New Yorker.
The writer makes reference to:

…an essay I wrote a few years back, for Teen Vogue, titled, in that publication’s lightly scolding parlance, “We Need to Talk About Digital Blackface in Reaction GIFs.” The piece, which was illustrated with an image of the former Real Housewife NeNe Leakes wearing a snarl, analyzed the digital legacy of cross-racial performance, and, in particular, how the prevalence of Black figures in so-called reaction shots—used, including by white people, to express impudent feelings of the moment—relied upon racist interpretations of Black expression dating back to the minstrel stage. I was a graduate student at the time, and my reading of the phenomenon of Black figures emoting on behalf of non-Black users online was informed by the work of young scholars such as Joshua Lumpkin Green (who coined the term “digital blackface,” in the context of video games) and Katherine Brown (who applied the term to GIFs on Tumblr). The piece was resurfaced, in the context of Harris’s performance, presumably in the hope that it might prompt people to think again about their ready presumptions of sass and shade when it comes to interpreting the nonverbal gestures of a Black woman at work….

And, there you have it: Any comment on Kamala Harris’s eye rolls, or her smug smirking while VP Pence was talking, or her bizarrely laughing about a fly – it’s all racist.