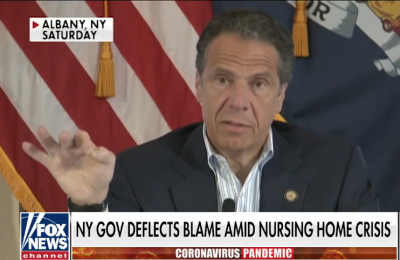 It took 15,000+ unnecessary deaths and a patronizing, smug attitude from the man responsible, but at least Democrats will step up, at last at this point in time, in the most egregious moments. It’s only nine right now, but it’s a start.

Nine Democratic New York State Assembly members signed a letter to their colleagues accusing Gov. Andrew Cuomo of obstruction of justice and asking that lawmakers set aside political loyalty and oppose him.

The letter comes after an aide in Cuomo’s administration admitted that data regarding nursing home coronavirus deaths were intentionally withheld from state lawmakers. Cuomo has been accused of contributing to the high number of nursing home casualties due to a March 2020 directive that prohibited nursing homes from turning away people because they had COVID-19.

“We implore you to set aside any concerns of loyalty or disloyalty to this Governor, or that this matter is politicized,” said the letter, dated Tuesday. “We must absolutely consider above all the sanctity of the democratic institution that we call the Legislature of the State of New York, and resolutely pursue justice in the face of an executive who we can say without hesitation has engaged in intentional criminal wrongdoing.”