Maizie Hirono On Dem Difficulty Connecting With Voters: We Know So Much 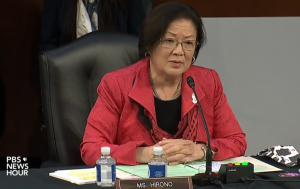 According to Sen. Mazie Hirono (D-Dumb), the Democrats – the party of “We believe in science and there are 57 different genders,” “unemployment is so low because everyone has two jobs,” “Guam might capsize and tip over,” “When they go low, we kick them” – and the party that Tammy Bruce, in her latest Washington Times column, writes how the Democrats are making fools of themselves at the Barrett confirmation hearings – are apparently so smart that they have trouble connecting with the great unwashed, er, American voters.

Because Dems are so “left-brain.” Or because they left their brains somewhere…or something.

In explaining why Democrats seem to have difficulty in connecting with voters, liberal Sen. Mazie Hirono (D-Hawaii) said it was because they speak more to the brain instead of the heart, that “Democrats know so much” and tend to be “very left-brain.”….

This section is for comments from tammybruce.com's community of registered readers. Please don't assume that Tammy agrees with or endorses any particular comment just because she lets it stand.
6 Comments | Leave a comment
Click here to cancel reply.