That Was Fast: Attorney General Jeff Sessions Is Out

by Tammy on November 7, 2018
Posted in: Politics, Trump
Tweet 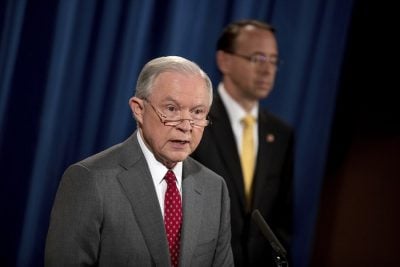 I have been a big fan of Senator Jeff Sessions. Not so much Attorney General Jeff Sessions. Glad this problem has finally been address. There is lots of talent out there. There is currently a state attorney general newly out of a job due to term limits: Florida’s Pam Bondi. Hmm…

….We thank Attorney General Jeff Sessions for his service, and wish him well! A permanent replacement will be nominated at a later date.

Embattled Attorney General Jeff Sessions resigned at the “request” of President Donald Trump on Wednesday after more than a year of public criticism from the president.

Whitaker also will assume oversight of the ongoing investigation by special counsel Robert Mueller into Russian interference in the 2016 presidential election, and possible collusion by Trump’s campaign in that meddling.

Sessions’ letter to Trump begins by saying, “At your request, I am submitting my resignation.”

Sessions, a former senator from Alabama, departs after the president repeatedly hammered him about his decision last year to recuse himself from the investigation into Russian interference in the 2016 election and whether the Trump campaign colluded with the Kremlin.